The title of this article may sound like heresy to those who have been schooled to believe that when diabetes happens to you, it is with you for life. There is far more to the story than both drug and naturally-based palliative medicine normally touches upon.

According to the American Diabetes Association (ADA) statistics, diabetes now afflicts 25.8 million Americans, or 8.3% of our population. Only 5% of diabetics are type 1, where through autoimmune destruction of insulin producing beta-cells, they are told they have a lifelong dependence on insulin. The rest are classified as type 2, resulting from insulin resistance (the cells of the body stop responding to insulin) combined in some cases with insulin deficiency. Additionally, according to the ADA 1 in every 4 Americans have pre-diabetes, or 79 million.

While geneticists apply vast amounts of time, energy and money to finding the causes of disease in our genes, much less attention is placed on well-known triggers of autoimmunity such as infections, vaccines, pesticide and petroleum exposure (diesel fuel particles) and the consumption of foods like wheat, cow milk and soy (unfermented, GMO and/or excessive) are the major contributing factors in the development of type 1 diabetes. Additionally, the consumption of high fructose corn syrup and hydrogenated oil and basic deficiencies of omega-3 fatty acids, magnesium and chromium contribute to the development of type 2 diabetes.

Blaming bad genes on diseases like diabetes is a convenient way to escape the obvious things we can do individually, and as a culture, to prevent the escalation of an already epidemic problem.

We shouldn’t settle for the unlikely prospect of a future cure via the pharmaceutical pipeline, gene therapy, stem cell research or similar high-priced technological endeavors, when the cause (and therefore the cure) of diabetes may be as close to us as what is at the end of our fork.

It is accepted truth that type 1 diabetes involves the immune system attacking the insulin-producing beta cells in the pancreas. Subsequent damage to the pancreas leads to the reduced capacity to produce insulin. While geneticist look for the bad genes that are supposedly causing the autoimmune problem, it is well documented that in susceptible individuals something in wheat known as gliadin, for instance, stimulates diabetogenic class II HLA antigens on the surface of the pancreatic islet cells (cells that normally do no display these antigens), marking them for autoimmune destruction. [Do dietary lectins cause disease? BMJ. Also: The Dark Side of Wheat].

Not everyone who eats wheat will develop diabetes. Different people will exhibit differing degrees of susceptibility to wheat proteins and this is why it is right to say that there is a genetic component to the development of type 1 diabetes, or to any disease. But acknowledging the existence of genetic differences and differing susceptibilities to illness in a population is not to say that genes are causing the disease (read my short essay on why genes don’t cause disease here).

In the case of the wheat protein gliadin, it is not the gene that is causing the islet cell to present an antigen on its surface. It takes wheat gliadin to activate the genes necessary for this cellular transformation. To use an analogy, the genes predisposing one to higher risk for diabetes are like an unloaded gun. The bullets are certain antigenic foods like wheat, cow’s dairy and (unfermented, GMO and/or excessive) soy. The triggers that fire this loaded gun are varied, from prolonged exposure to these foods, to increased intestinal/gut permeability, vaccinations, viral infections, pesticide and chemical exposures and perhaps a multitude of as of yet unknown factors.

If we know that the two most commonly lauded health foods, cow’s milk products and wheat are implicated in the development of type 1 diabetes, wouldn’t it be a good idea to remove them from the diets of our young as a precaution? What is the other alternative? Succumb to the fatalistic fallacies of the gene theory of disease, and just hope that our children won’t develop the disease because they do not have the bad gene, or have just been lucky in the game of nutritional Russian roulette?

Even after the beta cells in the pancreas have experienced significant levels of destruction, and there is now insufficient insulin to keep blood sugar below toxic levels, the medical establishment pretends like the body’s self-healing and regenerative abilities dont exist. Every minute 60,000 cells in our body are reborn, and over the course of 100 days all approximately 17 trillion are replaced by new cells. If one can remove the causes of autoimmune self-destruction by clearing infections, removing diabetogenic foods, correcting mineral and vitamin deficiencies and imbalances, shifting the tissue and blood pH back from dangerously acidic
levels, and supplementing the diet with proven beta-cell regenerating foods, herbs, or nutrients, the pancreas (in some cases) can regenerate beta cell function. [see
list of beta cell regenerators here]. 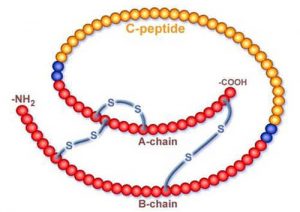 Learn more at Wikipedia on C-peptide

Ideally a good endocrinologist or clinician will test for C-peptide levels the moment (s)he is confronted with a newly diagnosed type 1 diabetic. The proinsulin precursor to insulin produced by your beta cells is composed of three parts: two insulin side chains, named A and B, and a peptide holding the two together known as C. Once the proinsulin is enzymatically degraded by the beta cells and its constituent parts released into serum to do their job, it splits off into three separate parts leaving the C-peptide as an accurate marker of just how much insulin the diabetic body is producing. Taking a baseline reading at the beginning of treatment establishes the pancreas level of health insofar as it reflects its remaining capacity to produce insulin. Instead of blindly throwing synthetically produced insulin at the problem (which through a negative feedback loop may cause beta cell regeneration to flounder, or cause further atrophy of those cells) a bare minimum of insulin should be used while encouraging the diabetic pancreas to come back on line with more of its own production.Â  Also, natural substances could be used that protect the remaining beta cells from further degeneration.

Moreover, the form of insulin being passed on as bioidentical with misleading names like Humulin and Humolog is a byproduct of recombinant DNA technology. All prescribed forms on the market, including Lantus, come from GMO E. coli bacteria which produce a form which is not as compatible with the human body as the once universally available bovine or porcine forms. Access to glandular extracts have been barred in the US mostly due to drug company pressures (You can order these animal forms from Canada over the internet). If the drug companies and their enforcers (FDA) have their way, all bio-identicals and/or animal glandulars will be made illegal or unavailable in the future, including Armour thyroid in favor of levothyroxine.

Ultimately, type 1 diabetes can be prevented. Even after there is established damage to the pancreas, much of the damage can be reversed. These words may be heretical to the conventional medical establishment, but absolutely rudimentary from the perspective of basic biology and enlightened nutrition.

Type 2 diabetes, and the pre-diabetic state of insulin resistance that precedes it, are caused by the following preventable factors:

One of the basic mechanisms of insulin-resistant hyperglycemia (type 2 diabetes) is as follows:

When we eat beyond our capacity, excess energy is stored in the body as glycogen and saturated fat. When through prolonged over-consumption of food our body no longer has room to store these unneeded calories, insulin resistance emerges. In order to protect from over-nutrition, the fat and muscle cells begin to lose the number of insulin receptors and/or loose function, thus reducing the amount of glucose that may enter. This causes the blood sugar to raise to unhealthy levels, leaving the pancreas with no other option than to overcompensate and produce more insulin. The resultant elevation of insulin levels can cause a number of adverse cardiovascular, neurological and endocrine effects.

If this cycle continues, eventually the insulin producing beta cells may become exhausted and lose their ability to produce insulin, resulting in double diabetes where you have low insulin and high blood sugar as well as insulin resistance.

Caloric restriction (especially carbohydrates) becomes of vital importance in forestalling the development of type 2 diabetes. Exercise is essential in helping the body use up stored energy, converting calories consumed into calories burned. Exercise has the opposite effect of over-eating, increasing the number of insulin receptors in muscle and increasing the sensitivity of the body to insulin thus releasing the pancreas of the burden of constant insulin production. Exercise also results in the release of appetite suppressing hormones and neurotransmitters which help to forestall over-eating.

Carbohydrates generally have an insulin secreting effect on the body because they have a high glycemic rating, relative to proteins and fat. That is to say, carbohydrates cause the blood to become sweeter than protein or fat, which are broken down slowly in the body, independently of insulin. Even so-called complex carbohydrates like puffed rice have higher glycemic ratings (110) than white sugar (80), which is itself 50% fructose, and therefore less likely to induce an insulin response than these whole grains. On the flip side, fructose while having a low glycemic rating, can raise blood sugar on the back end by reducing the affinity of insulin for its receptor contributing to insulin resistance and elevating blood glucose. Fructose also undergoes glycation (caramelization) much more readily than other carbohydrates, which contributes to much of the morbility and mortality associated with elevated blood sugar.

When it comes to whole grains, no food category is associated with greater misunderstanding in realm of blood sugar disorders. The perception that whole grains are good for our health and should be consumed in plenty is based on the assumption that the millions of years of biological evolution that preceded the advent of the agrarian revolution (circa 10,000 b.c.) are no longer relevant. We spent 300,000 years as archaic homo sapiens in the capacity of hunters, gatherers and foragers, where the consumption of cereal grasses, and especially the seed form of these grasses, would not have occurred with any regularity, if at all, excepting starvation
pressures.

Our metabolism is simply not designed for large amounts of starch, sugar, and synthetically produced sweeteners and fats. We need fruits, vegetables, seeds and nuts, and high quality sources of protein in plenty. Evidence exists demonstrating that the glycoproteins in starchy grains known as lectins, can bind to the leptin receptors in the hypothalamus blocking out the appetite suppressing effects of the hormone leptin. This is one reason why bread, pasta, cereal, crackers, etc. can generate incessant cravings and contribute to a condition known as leptin resistance. Wheat lectin also has affinity for insulin receptors in the body which could
result in both insulin-receptor stimulation based weight gain and/or insulin resistance, and which explains why it is used to get cattle to slaughter weight quicker.

High Fructose Corn Syrup (HFCS) and purified fructose have both been shown to cause insulin resistance in rats and humans. There are, in fact, over 70 other adverse health effects linked to purified fructose consumption. Hydrogenated oils also dramatically reduce the responsiveness of our muscle and fat to insulin, whereas omega 3 fatty acids increase that responsiveness.

To view our extensive data archive on the subject on potentially beneficial substances, dietary considerations and the relevance of drug and environmental chemical exposures in type 1 and type 2 diabetes, visit our pages on the subject below.

Sayer Ji is an author, researcher, lecturer, and advisory board member of the National Health Federation. He founded Greenmedinfo.com in 2008 in order to provide the world an open access, evidence-based resource supporting natural and integrative modalities. It is internationally recognized as the largest and most widely referenced health resource of its kind.