by I Wayan Nyepi – Traditional Healer

Like most natural medicines, Red Salve / Compound D contains potent alkaloids. Alkaloids are types of highly-specific toxins. The alkaloid
toxins in Red Salve are proven to affect only specific types of disease, and do not harm healthy tissues, when applied correctly. 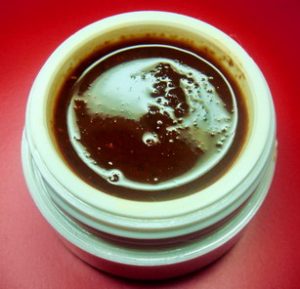 A more potent form of the Traditional Bloodroot Salve / Compound A, with an added variety of roots and a courser grind. It still contains zinc chloride, blood root, and galangal, as in Compound A.

Red Salve is intended for use in serious cancers, both internal and dermal.
It is more effective in treatment of metastatic ailments. Consider using this in combination with Yellow Powder / Compound B.

The most active alkaloid is sanguinarine. This comes from the root of a wild herb called sanguinaria canadensis, also known as blood root. Sanguinarine toxin is specific to virus cells, most importantly many kinds of virus that create various cancers. Blood root also contains at least 15 other known alkaloids and flavonoids that also target various virus and undesirable bacteria. Generally speaking, cancers are initially supported by undesireable bacteria, in conjuction with virus.

In addition, we add oxidized zinc chloride, which lowers the pH of the Salve, to make it mildly acidic. Zinc chloride is used in many cosmetics, deodorants, and mouthwashes. The zinc acts as a vehicle for the alkaloids, that opens a pathway to the diseased tissue cells, similar to the action of a tincture. Zinc, in balanced combination with the sanguarine and galangin, speeds the action of
the alkaloids.

Red Salve / Compound D also contains an alkaloid named galangin. Galangin comes from the root of a plant called galangal, that grows here in Indonesia. Galangal additionally contains at least 14 other potent alkaloids and flavonoids, all proven to kill cancer and other virus, and corresponding bad bacteria. Galangin is a potent immune system stimulant.

In addition to all of the ingredients contained in Tradtional Bloodroot Salve / Compound A, we have added 3 more roots, also from the zingerbrachea root family, from which the traditional galangal also comes. Temu lawak, kunyit kuning, and temu kunci.. These three roots add at least 20 more beneficial alkaloids, each effective in the treatment of differing virus and bacteria conditions, making the medicine more ‘broad spectrum’ in effect.

As the virus dies, the immune system is triggered to produce white blood cells, mucous, and inflammation, that serve to carry the disease from the body. When applied correctly, it does not harm healthy tissue.

All BSI medicines are hand-made in traditional ways. We offer the best quality and potency available.