There was not even one death caused by a vitamin supplement in 2010, according
to the most recent information collected by the U.S. National Poison Data
System.

Additionally, there were no deaths whatsoever from any amino acid or dietary
mineral supplement.

Well over half of the U.S. population takes daily nutritional supplements.
Even if each of those people took only one single tablet daily, that makes
165,000,000 individual doses per day, for a total of over 60 billion doses
annually. Since many persons take far more than just one single vitamin or
mineral tablet, actual consumption is considerably higher, and the safety of
nutritional supplements is all the more remarkable.

Over 60 billion doses of vitamin and mineral supplements per year in
the USA, and not a single fatality. Not one.

If vitamin and mineral supplements are allegedly so
“dangerous,” as the FDA and news media so often claim, then where
are the bodies?

27
Years: No Deaths from Vitamins,
3 Million from Prescription Drugs 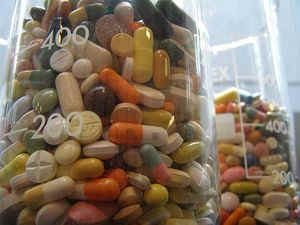 Over the past 27 years the complete time frame that the data has been
available there have been 0 deaths as a result of vitamins and over 3 million
deaths related to prescription drug use. In fact, going back 54 years there
have only been 11 claims of vitamin-related death, all of which provided no
substantial evidence to link vitamins to the cause of death. The news comes
after a recent statistically analysis found that pharmaceutical drug
deaths now outnumber traffic fatalities in the US.

In 2009, drugs exceeded the amount of traffic-related deaths, killing at least
37,485 people nationwide.

The findings go against the claims of mainstream medical ‘experts’ and
mainstream media outlets who often push the idea that multivitamins are
detrimental to your health, and that prescription drugs are the only
science-backed option to improving your health. While essential nutrients like
vitamin
D are continually being shown to slash
your risk of disease such as diabetes and cancer, prescription
pharmaceuticals are continually being linked to such conditions. In fact, the
top-selling therapeutic class pharmaceutical drug has been tied to the
development of diabetes and even suicide, and whistleblowers are just now
starting to speak out despite studies as far back as the 80s highlighting the
risks.

Mainstream medical health officials were recently forced
to speak out over the danger of antipsychotic drugs, which millions of
children have been prescribed since 2009. U.S. pediatric health advisers blew
the whistle over the fact that these pharmaceuticals can lead to diabetes and
even suicide, the very thing they aim to prevent. What is even more troubling
is that half
of all Americans will be diagnosed with a mental condition during their
lifetime thanks to lack of diagnosis guidelines currently set by the medical
establishment, of which many cases will lead to the prescription of
antipsychotics and other similar medications.

Covering up the side effects

In order to protect sales, the link between suicide and antipsychotic drugs
was completely covered up by Eli Lilly & Co, the makers of Prozac. Despite
research stretching as far back as the 1980s finding that Prozac actually
leads to suicide, the company managed to hide the evidence until a Harvard
psychiatrist leaked
the information into the press. The psychiatrist, Martin Teicher, stated
that the American people were being treated like guinea pigs in a
massive pharmaceutical experiment.

Greedy and oftentimes prescription-happy doctors are handing out antipsychotic
medication like candy to adults and young children alike. In 2008,
antipsychotics became the top-selling therapeutic class prescription drug in
the United States and grossing over $14 billion in sales.

Antipsychotic drugs are not the only dangerous pharmaceuticals. The average
drug label contains 70 side effects, though many popular pharmaceuticals have
been found to contain 100 to 125. Some drugs, prescribed by doctors to
supposedly improve your health, come with over 525 negative reactions.

Ritalin, for example, has been linked to conditions including:

Perhaps the hundreds of negative side effects is part of the reason why the
FDA announced last year that it is pulling
more than 500 cold and allergy off the market due to health concerns.
Prescription drugs kill more people than traffic accidents, and come with up
to 525 negative side effects. Avoiding these drugs and utilizing high quality
organic alternatives like whole food-based multivitamins and green super foods
will lead to a total health transformation without harsh side effects and an
exponentially increased death risk.

Previous PostEvidence-Based Medicine: Neither Good Evidence nor Good MedicineNext PostThe FDA Does Not Care About You
Looking For Natural Health
& Wellbeing?