Every once in a while a study pops up on the National Library of Medicine’s
bibliographic database known as MEDLINE that not only confirms the therapeutic
relevance of natural substances in cancer treatment, but blows the
conventional approach out of the water.

Published
in 2007 in the journal Planta Medica, researchers found that an
enzyme extracted from pineapple stems known as bromelain was superior to the
chemo-agent 5-fluorauracil in treating cancer in the animal model. The
researchers stated:

“This antitumoral effect [bromelain] was superior to that of 5-FU
[5-fluorouracil], whose survival index was approximately 263 %, relative to
the untreated control.” [view
entire study] 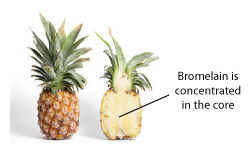 What is so remarkable about this research is that 5-FU has been used as a
cancer treatment for nearly 40 years, and has been relatively unsuccessful due
to its less than perfect selectivity at killing cancer, often killing and/or
irreversibly damaging healthy cells and tissue, as well.

As a highly toxic, fluoride-bound form of the nucleic acid uracil, a normal
component of RNA, the drug is supposed to work by tricking more rapidly
dividing cells — which include both cancer and healthy intestinal, hair
follicle, and immune cells — into taking it up, thereby inhibiting (read:
poisoning) RNA replication enzymes and RNA synthesis.

How then, can something as innocuous as the enzyme from the stem/core of a
pineapple be superior to a drug that millions of cancers patients over the
past 40 years have placed their hopes of recovery on, as well as exchanging
billions of dollars for?

There is a well-known effect associated with a wide range of natural compounds
called “selective
cytotoxicity,” whereby they are able to induce programmed cell death
(the graceful self-disassembly known as apoptosis) within the cancer cells,
while leaving healthy cells and tissue unharmed. No FDA-approved chemotherapy
drug on the market today has this indispensable property (because chemicals
don’t have behave like natural compounds), which is why cancer treatment is
still in the dark ages, often destroying the quality of life, and accelerating
the death of those who undergo it, often unwittingly. When a person dies
following conventional cancer treatment it is all too easy to “blame the
victim” and simply write that patient’s cancer off as
“chemo-resistant,” or “exceptionally aggressive,” when in
fact the non-selective nature of the chemotoxic agent is what ultimately lead
to their death.

Keep in mind that bromelain, like all natural substances, will never receive
FDA drug approval. Capital, at the present time, does not flow into the
development of non-patentable (i.e. non-profitable) cancer therapies, even if
they work, are safe and extremely affordable. This is simply the nature of the
beast. Until we compel our government to utilize our tax dollars to invest in
this type of research, there will be no level playing field in cancer
treatment, or any treatment offered through the conventional medical
establishment, for that matter. Or, some of us may decide to take our health
into our own hands, and use the research, already freely
available on possible natural cancer treatment, to inform our treatment
decisions without the guidance of the modern day equivalent of the
“priest” of the body, the conventional oncologist, who increasingly
fills the description of an “applied pharmacologist/toxicologist” –
nothing more, nothing less.

To view additional research on the potential therapeutic properties of
bromelain in over 30 health conditions, visit the open source, natural medical
resource page on bromelain here.

Bromelain,
also known as bromelin, is a protein-digesting enzyme extracted from the
flesh and stem of the pineapple
plant, Ananas comosus. Although the people of Guadeloupe introduced
Christopher Columbus to the fruit in 1493, Europeans did not recognize the
pineapple’s beneficial attributes until later. Pineapple had a long
history of traditional use among the native peoples of Central and South
America. They applied pineapple dressings to wounds and
skin injuries to reduce inflammation, and eased stomachaches and indigestion
by drinking the juice of the fruit.

Bromelain was first isolated from pineapple juice in 1891 and
introduced as a therapeutic supplement in 1957. The active ingredients of
bromelain are found in the juice and stem of the pineapple plant, but the
stem contains more bromelain than the fruit.

Bromelain is most notable for its effectiveness in the reduction of
inflammation and decreasing swelling, but the scope of its benefits
continues to increase. As a natural anti-inflammatory enzyme, bromelain
has many uses. Arthritis
patients may reduce the swelling that causes joint pain by taking
bromelain. Bromelain may also be helpful for the pain, numbness, tingling,
aching, and loss of motor and sensory function in the fingers resulting
from carpal tunnel syndrome (CTS).

The protease enzyme is beneficial in reducing the clumping of platelets
(small platelike bodies in the blood), the formation of plaques in the
arteries, and the formation of blood clots. All these effects help
to prevent and treat cardiovascular
disease. Bromelain has also been discovered to have anti-tumor action,
as well as helping the body absorb medications.

Although bromelain is often labeled an alternative treatment,
mainstream medical research continues to study its effectiveness in the
prevention and treatment of hematomas, or localized blood clots.
Bromelain has been found useful in the reduction of swelling and
congestion in the affected tissue after an athletic injury
or surgery. It is commonly used in Germany for this purpose.

Bromelain’s anti-clotting activity may be useful in preventing strokes, one of the
most feared results of obstructions in the circulatory system. Due to the
lack of oxygenated blood flowing to the brain, a stroke can cause
permanent damage to the affected area of the central nervous system.
Bromelain is thought to help maintain healthy cardiac tissue and reduce
the risk of stroke by its anti-inflammatory activity. By preventing mild infection
or inflammation caused by the fatty substances inside the blood vessels
where plaque may form, bromelain helps to reduce inflammation by digesting
the byproducts of tissue repair.

Bromelain is helpful to people with colds due to its ability to reduce
mucus and keep it moving out of the body. Bromelain has also been shown to
reduce the painful inflammation associated with costochondritis,
an inflammation of the cartilage that attaches the ribs to the breastbone.
In addition, bromelain appears to be beneficial to asthma patients.
Asthma is caused by spasms of the bronchial passages that restrict the
flow of air in and out of the lungs. Taking bromelain may reduce the
excess mucus that tends to collect in the respiratory systems of asthma
patients. In addition, people who suffer from hay fever
and similar seasonal allergies may also be helped by bromelain’s
antiinflammatory activity.

Additional benefits of bromelain include reducing the painful symptoms
of varicose
veins, including dull aches, tired legs and feet, and itchy skin.

Research has also shown that bromelain benefits cows as well as humans.
Bromelain has been shown to reduce the white
blood cell count in cows with mastitis. This
reduction increases the quality of their milk. Researchers have found that
bromelain works to reduce inflammation by interfering with the synthesis
of prostaglandins and other inflammatory substances.

Bromelain
is available as a dietary supplement that is offered in several different
tablet strengths. For rheumatoid
arthritis, the recommended dosage of bromelain is 250ï¿½750 mg,
taken two or three times a day between or before meals. In Germany, the
standard dosage to reduce swelling after surgery is 80ï¿½320 mg daily. The
supplement has found to offer the most benefit when taken on an empty
stomach, and its therapeutic effects are also enhanced when taken in
higher doses.

Increasing the dosage of bromelain to 400ï¿½1,000 mg per day has shown
to reduce the symptoms of angina pectoris (the severe pain and
feeling of constriction about the heart that often radiates to the left
shoulder and down the left arm).

Bromelain has shown to be generally safe when taken in moderate doses,
although a preliminary report links an increased heart rate with the use
of the supplement. People with an inflammation of the stomach lining
should not use digestive enzyme supplements such as bromelain. In
addition, the safe use of bromelain in pregnant or
nursing women, small children, and people with kidney or liver disease
has not been established.

While bromelain can be taken safely without side effects in moderate
doses, there are anecdotal reports of allergic
reactions to it. Other side effects that have been
observed include nausea, vomiting, diarrhea, and menorrhagia
(excessively heavy menstrual flow).

Plaque
ï¿½An abnormal hardened deposit on the inner wall of an artery.

Because of bromelain’s anti-clotting activity, it should not be
combined with other blood-thinning medications, such as warfarin (Coumadin), heparin, or aspirin. It is also
possible that bromelain could cause problems with bleeding if it is
combined with other complementary
therapies that thin the blood, such as garlic or gingko biloba.