For more up-to-date and complete information, please go to their website:
http://sodiumbicarbonate.imva.info/index.php/cancer-treatment/ 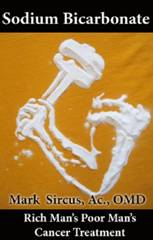 I recommend people contemplating using sodium bicarbonate orally read Sodium Bicarbonate ï¿½ Rich Manï¿½s Poor Manï¿½s Cancer Treatment. People
around the world are waking up to the fact that sodium bicarbonate
belongs in every protocol for cancer.ï¿½ Robert J. Gillies and his
colleagues have demonstrated that pre-treatment of mice with sodium
bicarbonate results in the alkalinization of the area around tumors.
(Raghunand 2003) This type of treatment has been found to ï¿½enhance the
anti-tumor activityï¿½ of other anticancer drugs. This is very similar to
the recently published research of injecting O2 directly into tumors
where such direct administration of Oxygen also facilitated the action
of chemotherapy.

We can certify bicarbonateï¿½s
usefulness for cancer patients from a number of different angles
without pinning all our hopes on the fungus thesis. When doctors like
Dr. Moss tear down the ï¿½cancer is a fungusï¿½ theory they conveniently
forget to inform their readers that even mainstream oncologists
recognize the routine involvement of late stage infections in cancer
and that experts concede that as high as forty percent of cancers are
caused by pathogens.[1]
The most recent research in this area demonstrates how even viruses can
be responsible for up to fifty percent of certain types of cancers.

I have written several chapters on the subject of fungus and late stage infections in my Sodium Bicarbonate ï¿½ Rich Manï¿½s Poor Manï¿½s Cancer Treatment
book and it is obvious that there is no simple definition of cancer.
Butï¿½ï¿½this is probably the biggest but in the medical world; we can in
fact reduce cancer to an image level. One has to admit that cancer is a
rot that is destroying the body and will kill it left unchecked. When
the body is rotting, when its cells are demonstrating dire distress,
when certain colonies of cells reproduce without stop and change their
type of metabolism we have a certain condition that takes shape and
form depending on where the cancer is and what is causing it.

No matter where we would like to
drop our concepts and numerous names for different kinds of cancer it
should be obvious that ï¿½ like any type of rot ï¿½ pathogens will be
attracted and in late stages the fungi colonies will rule the roost.
Whether cause, effect or byproduct of the fungi, mold and yeasts like
Candida will be found in evidence. Dr. Simoncini intelligently observed
that, ï¿½Over acidification of the body leads to the development of chronic yeast and fungal infections and ultimately cancer.ï¿½

Cancer is, fundamentally, a relatively simple oxygen
deficiency disease and the use of bicarbonate
increases oxygen carrying and reaching capacity.

It is dull though, not to include
even deeper definitions of cancer. If someone wants to say cancer is a
fungus he might as well say cancer is a nutritional deficiency and
relative state of poisoning. One is not likely to fall to cancer if
oneï¿½s body is humming in a heightened state of nutritional sufficiency
and that includes full hydration and plenty of healthy sun exposure.
Add plenty of restful sleep, relaxed conflict free existence and a
pristine environment (something that does not exist anymore on our
planet sadly) then we can start talking about health. One must include
freedom from dental amalgam, fluoride, chlorine and vaccines to talk
about health and a cancer free existence.

[1] ï¿½I
believe that, conservatively, 15 to 20 percent of all cancer is caused
by infections; however, the number could be larger ï¿½ maybe double,ï¿½
said Dr. Andrew Dannenberg, director of the Cancer Center at New
York-Presbyterian Hospital/Weill Cornell Medical Center.ï¿½ Dr.
Dannennberg made the remarks in a speech in December 2007 at the annual
international conference of the American Association for Cancer
Research.

[2] A sexually transmitted virus that causes cervical cancer is also to blame for half of all cases of cancer of the penis
http://news.yahoo.com/s/nm/20090824/hl_nm/us_cancer_penis